Word for 2020 by Arleen Westerhof

“Then He who sat on the throne said, ‘Behold, I make all things new’” (Rev. 21:5). “And the nations of those who are saved shall walk in its light, and the kings of the earth bring their glory and honor into it…And they shall bring the glory and the honor of the nations into it” (Rev. 21:24, 26).
In January 2019 I prophesied that there are doors that are open in the Spirit that have never been open before in our lifetimes. This past year many have seen miraculous doors open – to the nations, to awakening, to promotion in the Spirit and in the natural, and to the fulfilment of prophetic words that they’ve been waiting on for years!
This year the Lord says, “You have passed through the gates. You’re in a whole new space. Now it’s time to ADVANCE and take the land!” 2020 will mark the beginning of a decade that will go down in history as the Era of the Nations. Epic battles in the Spirit will lead to unprecedented Kingdom advancement, the Great Harvest coming in, nations being baptized and the culture wars being won, and a new level of authority attached to the proclamation of the prophetic word.

UNPRECEDENTED KINGDOM ADVANCEMENT
In 2010 during a period in which our church was fasting and praying for 40 days, the Lord gave me a vision. In this vision I saw many Believers standing at the border between the wilderness and the Promised Land. They were celebrating. They had made it through the wilderness and were ecstatic! As they worshipped and praised God signs, wonders and miracles were prevalent. They spent time admiring the Promised land from the border and talking about how wonderful life would be now that they had arrived.
I was very surprised when, in the same vision, the Lord showed me the situation several years later. Memorials had been built to commemorate the great work of God in leading them through the wilderness. Many churches had also been started and some of these were thriving. They were however still on the border.
When He showed me the situation much later I wept. An entire generation had lived and died on the border without ever entering the Promised land that still lay before them. Back then I wrote: “This will happen because many of us have not realized that breakthrough (revival) is not the victory. Even after breakthrough there are battles to fight. Breakthrough is a position from which we advance on toward the victory (reformation and transformation).”
Fortunately, God has used the last decade to change our understanding of His kingdom. Things are now in place for a new move of the Spirit unlike any that the world has ever seen. The Promised land lies before us and the voice of the Lord is calling out, “Your battle is not against flesh and blood. It’s against powers, principalities and spiritual forces of evil in the heavenly realms (Eph. 6:12). Much ground has been lost and there are culture wars that will need to be fought. I promise to be with you as you move out at the sound of My voice. This is a time of heavenly visitations in which I will cause ordinary men and women to realize who they are in Me – mighty men and women of valor! So arise in the strength that you have and (re)take your nations!” (Judges 6:14).
I see a messenger angel crisscrossing the earth crying out, “It’s not a time for appeasement. It’s a brave new world and it’s time for the brave to arise and take the land” (Matt. 11:12).
“But the people who know their God shall be strong and carry out great exploits” (Dan. 11:32b).

THE GREAT HARVEST
“And He said to them, ‘Go into all the world and preach the gospel to every creature. He who believes and is baptized will be saved; but he who does not believe will be condemned. And these signs will follow those who believe: In My name they will cast out demons; they will speak with new tongues; they will take up serpents; and if they drink anything deadly, it will by no means hurt them; they will lay hands on the sick, and they will recover.’” (Mark. 16:15-18).
Great doors are open in the Spirit for the preaching of the Gospel (1 Cor. 16:8-9; 2 Cor. 2:12). These doors will remain open during this next decade. A wave of God-consciousness will cover the earth. Congresses and Parliaments that used to have atheist agendas will be opened in prayer. Schools (including many public schools) will open their doors to  prayer. We will see large scale, national prayer meetings broadcast on major commercial and state-owned television networks. “Is anything too hard for Me?” says the Lord.

A shift in the prayer movement and harvest
There’s a shift occurring in the prayer movement as God pours out a spirit of boldness on His intercessors. This new era will see the proliferation of ‘Contending Houses of Prayer.’ Houses of prayer that wage war in the Spirit and know how to use their authority in the Courts of Heaven will be raised up to counter the increase of demonic attack against God’s children. Strategic levels of intercession will be released to run together with evangelism to see the harvest of souls come in. The Spirit of the Lord is saying” “It’s harvest time!”

Regions of great harvest
Some of the greatest harvest will come in from the nations that are most closed to the preaching of the gospel. “North Korea and the Middle East are Mine!”, says the Lord. Look to the “Silk Road” that China is creating. It is My road and from the east coast of China to the Middle East, each of the 40 nations that it runs through will be irrevocably changed by the preaching of the Gospel of Jesus Christ.

Time for the born-again church
Another fruitful field for evangelism will be the church. Many know of Him, but don’t know Him. I hear the Holy Spirit saying, “It’s time for the born-again church!” Signs, wonders and miracles will be commonplace as the Holy Spirit falls in churches and sweeps people into the Kingdom. Churches that close their doors to this and insist on being based on purely intellectual Christianity will not be able to stand in this new decade.

A New Apostolic Age
It is no longer just the Age of the Evangelist. This new decade will also be known as the ‘New Apostolic Age.’  Unusual signs and wonders will accompany the preaching of the gospel and the church will return to her apostolic foundations to take the nations.

Persecution against the Church
“Persecution against the Church will increase, but I am sending out My evangelists,” says the Lord. “They will be everywhere – on the street corners, in the schools, in the media, on the internet – everywhere! It’s a new D-day. Each new wave of persecution will cause the wave of evangelists to increase in size and speed.” Before the end of this decade, the sound of the Gospel of Jesus Christ will have covered the earth.

BAPTIZING NATIONS AND THE CULTURE WARS BEING WON!
“And Jesus came and spoke to them, saying, ‘All authority has been given to Me in heaven and on earth. Go therefore and make disciples of all the nations, baptizing them in the name of the Father and of the Son and of the Holy Spirit, teaching them to observe all things that I have commanded you; and lo, I am with you always, even to the end of the age” Amen.’” (Matthew 28:18-20).
We’re not just called to baptize individuals We’re also called to baptize nations in the name of the Father, the Son and the Holy Spirit. 2020 marks the start of a renewed missions mandate: the Gospel to every tribe, tongue, nation and sphere of influence on the planet.  This will lead to the “great reset” as we engage in the culture wars.
Jesus is worthy of nations and cultural transformation is the key. Systems and institutions that are now in the grip of Babylon (the anti-Christ spirit) will be won back to the Lord as He releases divinely-inspired strategies for transformation of the world’s spheres of influence and sends His children to transform them. It’s the age of the marketplace minister and many who pray and receive these strategies will also be the ones called to go and to implement them.

The fate of the nations and Israel
The fate of the nations is in the balance in this new decade. Those that align themselves with the Lord, and with Israel,  will bring their glory (the best that their culture has to offer) to Him both here on the earth and in eternity. “The city (the New Jerusalem) had no need of the sun or the moon to shine in it, for the glory of God illuminated it. The Lamb is its light. And the nations of those who are saved shall walk in its light, and the kings of the earth shall bring their glory and honor into it” (Rev. 21:23-24).

A NEW LEVEL OF AUTHORITY ATTACHED TO THE PROCLAMATION OF THE PROPHETIC WORD
Last year I wrote: “At creation, God’s Spirit hovered over the waters. Suddenly the sound of His voice burst forth: “Let there be light!” Then there was light. This season is about the power of the sound that God is calling us to release on the earth. As we issue supernaturally-inspired decrees and call forth what we hear in the Spirit, God will release a new level of supernatural power, joined to the prophetic, so that the impossible (humanly speaking) will become possible and will manifest here on the earth.”
2020 will see a new generation of Elijah prophet raised up. These prophets will stand before kings and rulers and proclaim the word of the Lord. They will say, “At my word, this specific thing will happen so that you may know that there is a God in Heaven who presides over the affairs of men.” God will back up the words of His prophets and will display Himself as El Shaddai through this new release of power through the prophetic that will cause nations to shift into their destinies and the timings of God.
This is the era in which God says: “Ask of Me and I WILL  give you the nations!” (Ps. 2:8)

“A prophetic word for the USA, Russia, China and Iran. The dragon, the bear and the wolf that wanted to be a lion. We are living in a day and 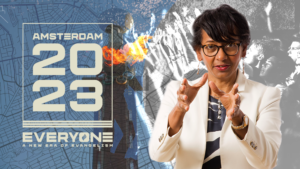